Riders of the Storm: Do dragonflies really make epic journeys across the Indian Ocean like sailors of old? 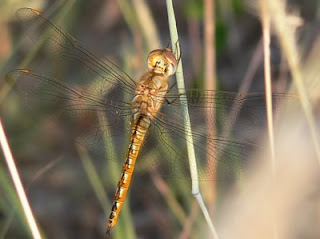 “They come in by their hundreds, like fighter planes in an old war movie” says Terence Vel, referring to the swarming of dragonflies, cigal in Creole, towards the end of each year on Mahe island. Terence runs Dragonfly Watch, an educational program set up by Nature Seychelles at the Sanctuary at Roche Caiman.

Terence and I have noticed that for some species, particularly the Wandering Glider also known as the Globe Skimmer (Pantala flavescens), the breeding is obscure but large numbers suddenly appear at the Sanctuary at Roche Caiman especially in the Northwest monsoon.


Now, it seems the mystery has been solved. Or has it? A researcher, R. Charles Anderson of Manta Marine Pvt Ltd in the Maldives, proposes in the Journal of Tropical Ecology that there is a massive annual migration of dragonflies across the Western Indian Ocean from India to Seychelles and East Africa http://journals.cambridge.org/action/displayAbstract?aid=5645072

Although some species of dragonflies are known to fly long distances, the proposed migrations, regularly crossing 3500km or more of open ocean, were previously unknown and if proven would be a spectacular phenomenon, beating even the migration of the Monarch butteries in the Americas. Many ancient peoples crossed thousands of kilometers of ocean to reach East Africa from Asia but cannot be compared to fragile looking insects like dragonflies

Anderson was originally interested in the annual appearance of millions of dragonflies in the Maldives, coral islands that lack fresh water and therefore an unlikely place for dragonflies whose larvae live in freshwater. It became apparent to him that the dragonflies were arriving across the ocean from Southern India. This then raised questions as to how and why they make the crossing.

The arrival dates of dragonfly species, mostly the Wandering Glider but also others, in the Maldives and India seem to demonstrate that the dragonflies travel from southern India, a distance of some 500–1000 km. Dates of arrival and occurrence coincide with the passage of the monsoon trough also known as the Inter-tropical Convergence Zone (ITCZ). Anderson says that circumstantial evidence suggests that the dragonflies fly with tail winds, within and behind the ITCZ, at altitudes over 1000 m.

His theory is that the dragonflies found in Maldives are actually en route to Seychelles and East Africa. Arrival dates in the Seychelles support this hypothesis, Anderson says.. Dragonflies also appear in smaller numbers in the Maldives in May, with the onset of the Southwest monsoon, suggesting a possible return migration from Africa, a truly incredible feat if true.

The Wandering Glider or Globe Skimmer is a widely spread species, well known to be a long distance flyer and highly adept glider as its various vernacular names suggest and has been seen flying at speed across oceans, mountains and plains; it has an enlarged base to its hind wings, which is a feature associated with gliding. In addition to enjoying low-cost flight across the ocean, the dragonflies might also be able to feed en route, Anderson postulates.

The Wandering Glider also has a remarkably brief larval life, and complete several generations each year, so the species may be able to take opportunities of brief and temporary pools of water to breed.

Anderson points to the migration of birds across the Western Indian Ocean to bolster his theory. He says that several bird species migrate from India across the Western Indian Ocean to wintering grounds in Africa. They do so at the same time as the dragonflies, presumably taking advantage of the same seasonal tail winds. Many of these birds also eat dragonflies; the possible significance of this was not previously appreciated, according to him.

Despite all the excitement raise in the popular media and on the world wide web, much of this is still circumstantial. As Anderson himself notes there is as yet no proof of Indian dragonflies arriving in East Africa, for example. In addition to the lack of direct evidence, his discussion in the paper raises a number of questions which cannot be answered at this stage.