The Economy and the Environment 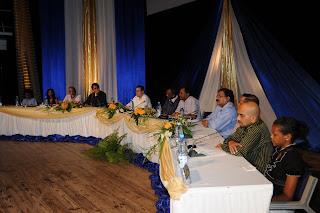 The Central Bank of Seychelles celebrated its 31st Anniversary on November 3rd with a special event keynoted by the President of Seychelles and discussions by a panel representing key sectors. Below is what I said.

I would like you to consider the Seychelles 1 Rupee coin. On the tails side an extraordinary event is depicted. A triton shell, or lansiv in Creole, is eating a starfish, the Crown of Thorns which was feared in the 70’s and 80’s as the prime destroyer of coral reefs. And the triton was thought to be its predator.
Then in 1998 warm waters bleached our corals causing massive die off. Along with the coral went the crown of thorns as it had little food left. The moral of this story is that sudden changes like global warming or the economic crisis and resulting restructuring program can sweep away the existing status quo.

Just as our currency is decorated with environmental icons and the central bank logo depicts a protected species so it is that our two main economic pillars, fisheries and tourism, even after the economic reform process, continue to have foundations built on use of wild species, natural landscapes & seascapes, and ecosystem services.

The environment, and the economy AND how we see ourselves as Seychellois and as a nation are all intertwined. Concerns about or impacts on the environment may reverberate through the economy and society. Who or where would we be if the coral reefs were so badly affected that they could not feed the beaches which then disappeared?

The economic restructuring has had an impact on vulnerable groups and as people face hardships they inevitably turn to natural resources to eat or to sell and thus we see poaching of protected species on the rise. At the same time a small growth industry in environmental consultancies has emerged propelling the rise of environmental NGOs where previously there were only a few. Development of ecotourism has also expanded.

In fact, as part of the restructuring I see that the environment can be the source of new and innovative growth industries and activities, as we have seen in other countries. But barriers, particularly inappropriate policy and legal frameworks, monopolies, petty jealousies and constrained funding, prevent a game change.

Nevertheless, a recent scientific paper has shown that of all the countries in the region, Seychelles has the most socio-economic potential to leap frog a calamity like coral bleaching. That’s great but how do we leverage this capital? Is it with sameness or with newness?

(Adapted from the presentation I delivered as a Panelist at the Central Bank of Seychelles' 31st Anniversary event held at the International Conference Centre on November 3rd. Story in the Seychelles Nation: http://www.nation.sc/index.php?art=17572 )