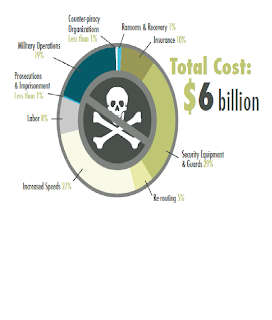 A sea change in the global response against Somali piracy maritime piracy was seen in 2012. Between naval operations, improved international coordination, continued observance of industry best practices, and increased use of private armed guards, the number of hijackings dropped 50% from 2011, and attempted attacks fell by just over 70%.

This significant drop in Somali piracy in the Indian Ocean –only 36 confirmed pirate attacks in 2012 compared to 176 in 2011 – shows that the concerted, cooperative effort by the international community appears to have moved the global fight against maritime piracy out of the crisis management phase and into an era of reduced piracy numbers, says a report The Economic Cost of Somali Piracy 2012 launched this week in Denmark by Oceans Beyond Piracy (OBP), a project of One Earth Future Foundation.

Though the number of attacks and hijackings is down along with the cost of piracy overall, the outlook is not entirely positive says the report. This is because the incidence of piracy fell much faster than the cost of combating the problem. In fact, the cost-per-hijacking and the cost-per-attempt rose 68.6% and 199.5%, respectively, between 2011 and 2012. In 2011, $250.0 million was spent per successful hijacking. In 2012, that number rose to $421.4 million. This strongly suggests that continuing with current approaches to counter-piracy efforts is economically unsustainable in what may be a new phase of reduced pirate attacks and hijackings. It is time to move away from short-term, crisis management approaches to piracy and towards a long-term, sustainable solution.

Marcel Arsenault the founder of the One Earth Future Foundation says “Let’s not kid ourselves: suppressing piracy and solving piracy are very different things. In the end, piracy can only effectively be solved on shore. It is time for our efforts to move on ground in Somalia, providing hope in Somalia by providing opportunity. Only when Somali teenagers have greater access to jobs than to guns will they turn to work rather than piracy”