Food Insecurity – The Next Zombie Apocalypse 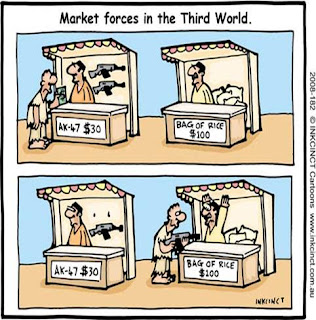 Sounds like some B movie? Well, it was to get your attention to talk about the coming food scarcity. Seychelles ranks last in Africa as regards investment in agriculture. Old news you say. Indeed, I reported on this dubious distinction twice already in my articles in the local media. But it seems that the dire news has not really found traction in the general Seychellois populace, the private sector or most government ministries outside the agriculture sector.

Peter Sinon, The Minister for Natural Resources seems to be the lone voice in the wilderness. He said in the National Assembly this week that his Ministry is working to remove obstacles which are hindering the progress of the agricultural sector . This move is really necessary but I wish the entire country would pay attention to what global experts have been calling “the coming food crisis”.

A few years ago, Sir John Beddington, the British government’s chief scientific advisor stated that with the world’s population growing, food supplies diminishing, and water supplies becoming more scarce, all of these factors would combine to form a ‘perfect storm’ in 2030 resulting in food shortages and rioting.

But other experts have predicted food shortages much earlier than this. In fact, if you thought the beginnings of the Arab Spring were about democracy you are mistaken. The revolution started because of the price of food. The timing of violent protests in North Africa and the Middle East in 2011 as well as earlier riots in 2008 coincides with large increases in global food prices according to the US-based New England Complex Systems Institute.

Food prices are constantly rising owing to climate change- related crop failures as well as speculation on the price of food which has become worse because of deregulation of the commodities markets and the removal of trading limits. Subsidies are also encouraging the conversion of food crops notably corn into higher value biofuels and driving food prices further up.

As a small island society we have to sit up and take notice. Superimposed on the global situation there are certain endemic qualities that make Seychelles even more vulnerable to these external shocks than most. We are a small, sea-locked nation far from markets. This geographical reality combined with diminished agricultural activity, a growing up-market tourism industry and a liberalising economy indicate a far from rosy future for food prices in Seychelles.

There are other things that are all shaping up to become what I am calling an “axis of evil”. I had noted in an earlier blog that the combination of reduced import duties on fish, depletion of fish stocks in our waters and an aging fisher population would cripple the development of the local fishery. The newly opened economy is also leading to market failures such as cheap chicken imports resulting in the near-death of the local chicken production. The cheaper prices of imported food will not last because they are dependent on subsidies and perhaps other artificial factors in the producer countries. What happens when the prices of imported foodstuffs rise and local production of food is inadequate to buffer the situation?

Whilst there may be people who will always have access to more than enough food there are others who are already vulnerable and will become catastrophic victims of high food prices. Food Insecurity is not a problem that can be tackled only by the ministry responsible for agriculture and fisheries. It a bogey-man whose impacts are so vast and alarming that all the Ministers, especially those responsible for of finance, trade and investment, employment, land use, environment, health, and education, must place it at the top of their agendas.The private sector must take advantage of the upcoming removal of barriers. At the civil society level Nature Seychelles took the lead about 7 years ago when it initiated its Edible Landscaping and Eco-agriculture projects as well as its Green Health blog.
Food Crisis Food Insecurity Food Security